Every flat surface in the house is covered with these shrines/mementos/altars in some stage of being made.

Some have Boddhisattvas, some have skulls (reminder of death so we can get on with living), some have photos of people who whispered a story when I looked at their faces. Every step has been a learning process-the most exciting part of making. 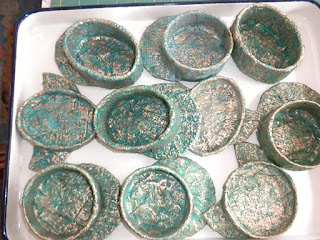 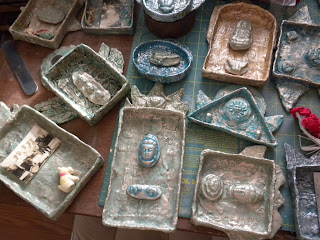 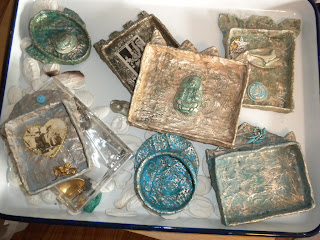 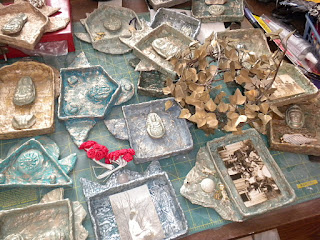 Once finished I'll hang them for sale in my room at Plantiques. 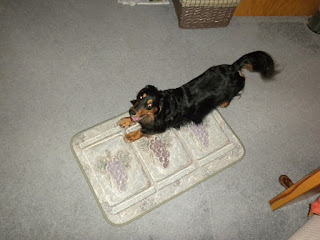 Also must give my little friend a bath so he can go to Thanksgiving dinner tomorrow. Happy Thanksgiving!

The last leaf and well come (good will)

For several days now I've been watching the last leaf on my cherry tree. 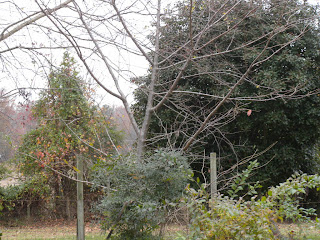 Do you see it there in the upper right quad of the photo above? It's been hanging on for two windy days. That's remarkable as I watched the final 20 or so leaves drop the past few days. Anyway, in my new, nonworking existence my front yard is much more familiar.

This...and many others are 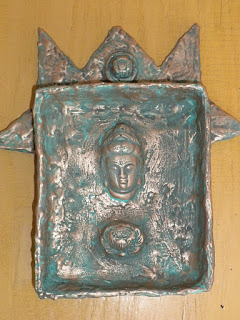 what I've been making with the small molds and plaster boxes. This shrine goes to my special friends' new home in Wales. The Kwan Yin and Lotus are symbols dear to us. The open hand at the top is one of my new important symbols.

This summer I noticed that as we drive down our narrow, rural roads in the Va back country that those who live out here usually lift at least the top half of their hand above the steering wheel while passing. When folks don't offer this gesture I feel a bit uneasy so I did some researching that gesture.

An Open Hand is to show evidence of No Weapon. Odd, but this must have roots in our bones. So at the top of the welcome shrine for my friends' new home an open hand shows no malice toward all who enter.  Well Come. And to the leaves...well gone. See you again next spring if I'm lucky!
Posted by Patty at 6:12 PM 5 comments:

Notice that I dropped plaster as a material I use with molds. Last week I went to Jerry's Artarama and got an 8 lb box of white sculpey ($32.00-much better buy than the 1 lb box) and I've been using this in molds with great results. Do NOT mix the softener with it...just use it as it comes out of the box. I've experimented all week and learned lots more.

Silicone caulk; the fast drying caulk (the kind you use the giant squirt gun thing with) leaves lots of air holes, cracks fast but also dries FAST. The tubed caulk (Elmers Squeez'n caulk and Loctite tub and tile ultra sealant-clear) worked the best and have not cracked from multiple casts.You can use this caulk for the first layer of the mold. I've been using veg oil on the matrix to ease the mold off.  The silicone giant squirt gun kind is good to build up the backs of the thinner, slower drying first caulk molds. 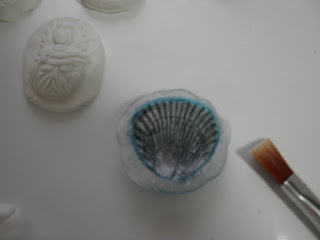 After trying oil (messy) and alcohol (ditto) I came upon an online article mentioning plain old talc powder as a mold release. This is just perfect and I've been getting great mold castings. (sorry for the poor photos-I'm in need of a better camera)

So, I'm using Sculpey to make the molds with a talc release.I dust the mold with the powder, then push a small kneaded ball of Sculpey into the mold until I feel sure the details are picked up. 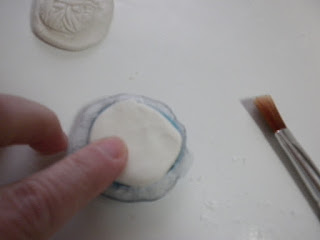 Then I flip it sculpey side down on the enamel butcher's tray and push from the outside of the mold to make the back somewhat flat. This also makes the casting stick to the enamel. 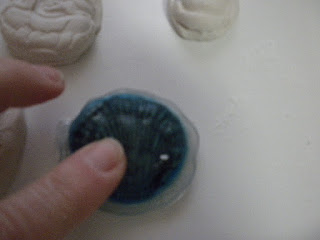 Carefully I lift up the silicone mold (flexibility of the mold is what makes this so much easier) and you will have a good casting. 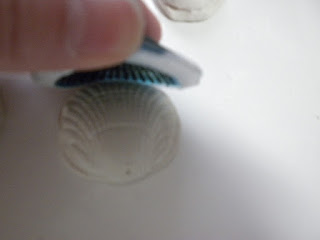 You can make multiple molds like these skulls and cast them together or apart; 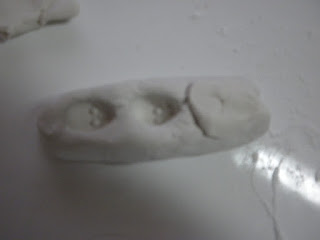 Then it's time to bake. I was lucky to find a thrift store Black and Decker toaster oven with a timer and thermostat. Remember, you're not going to ever use this for food so if it's a yucky, used one it doesn't matter. 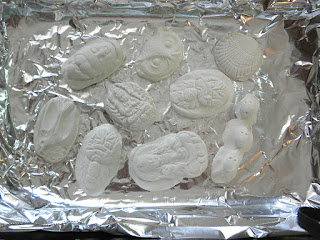 Line the pan with alum foil and use the scraper tool or a metal spatula to place (similar thickness) pieces on the pan. Then tent them with more foil to guard against burning. Even so, some will burn but I'm going to paint these in the end it's no matter. 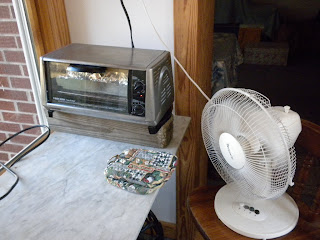 The fan is directing any fumes out the sliding door... 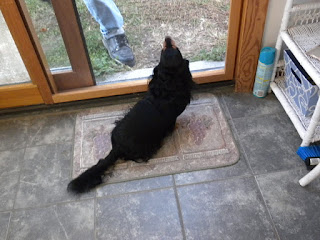 Note my muse...also note that I don't let him in the room while baking Sculpey. His lungs are tiny and it wouldn't take many fumes to irritate him. He just supervises before and after. If you have a cat, keep it out of the baking room as well. My oven has a timer bell which is really nice. 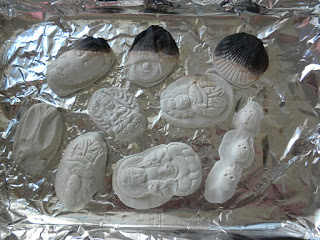 Once the timer goes off I wait several minutes for them to completely cool inside the oven. I think this helps the curing process inside. See what I mean about burning? There's no distortion of the image so it's ok.
To check that they are cooked and cured I press a fingernail into the back. If no mark is left they're good to go. I've used E-6000 glue to attach them to unpainted plaster and it's a good hold. Hope this saves you a little time with your mold making adventures!

Awhile back I took Stephanie Lee's plaster workshop online. I've been experimenting with making smallish
molds to use in my work so I thought I'd share what I've learned about 3 mold making materials that don't cost as much as materials dedicated to molding.

Part one will be making the actual mold-what I learned about the materials I tried. Part two will be using the molds to make small, low relief items.

The first material I used was silicon caulk. I used Elmer's Squeez'n Caulk (clear) because I already had it. I'm sure you can find cheaper silicon caulk in larger sizes for less per oz.

If the object you're using to make the mold (I'll call this the matrix from now on) is metal or painted it will be affected by the silicon (turn green, paint will come off).

If the matrix has a hole in it sew it down to freezer paper. This keeps it stable while you're applying the caulk. Use freezer paper under the silicon mold. It'll be easier to remove when it's dry.

I'd suggest using the clear silicon caulk. It goes down milky white but becomes transparent as it dries, letting you know when it's time to remove the mold. Apply the caulk in several layers, letting each layer dry before applying the next one.

Your mold will be flexible after it dries, making it easier to remove the molded object. This material takes the longest to dry/cure but the flexibility is a big plus for me. 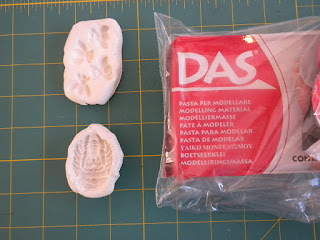 I did some online study before using this and one person said it can be baked in a 300 degree oven if it's too thick to air dry. The drying time is several days in a sunny inside location. Mine have been drying for 3 days and still are very cool, a sign that the inside is still damp. For an air dry clay, this takes wonderful detail. I didn't find the reported shrinkage (up to 3% reported by some users) to be a problem. With small molds this could be a problem. It took deep relief with no distortion. The mold is rigid when dry.

It comes out of the package ready to use with no real conditioning. In fact, it's better not to fold it as fold lines are hard to smooth out. I learned online to put it in a ziplock and keep it in the fridge. Completely non
toxic so that's ok.

The next mold making material I used was Sculpy. I have arthritis in two fingers so splurged on 'mold making' sculpy softener along with the large white block so I wouldn't have to condition (knead) it so much. 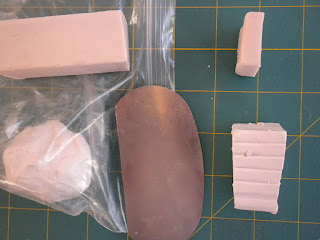 I cut a piece of each in this proportion; 1/4 conditioner, 3/4 sculpy. ONLY use this for making molds. It's too squishy to use in molds and will get stuck permanently in small areas.

The toxicity of sculpy hasn't been cleared up in my mind. When I bake it I have the toaster oven in front of the window with a fan blowing all fumes out of the house or, better still, put the toaster oven outside when baking it. Also, pick up a used toaster oven at the thrift store and only use it for sculpy-not for food.

Adding the softener made it very easy to condition. It took the matrix with deep relief. There was slight distortion of the mold as I removed it. This material has little shrinkage but must be cooked/cured completely.
So with my 3/8" thick molds I cooked it in two sessions at 275 degrees for 20 minutes each. I think this won't be such a good mold for plaster as the silicon but we'll see. Next, I'll try each mold and share what I've learned. 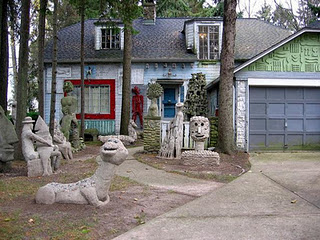 Mary Nohl spent her life making things. Angela Recada wrote recently about a visit to Mary's former home and shared photos of the outside garden and a link to her book. 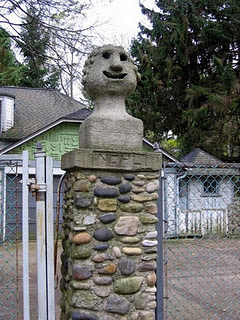 Mary died in 2001 but her home and work is now part of a foundation (even if it isn't open for visitors). I was unaware of this inspiring artist. Her work and life remind me of all the people who can't NOT make things even if they don't sell them in some gallery or make a living at making. Her work is joyful. Angela has included a video of Mary Nohl in an interview. Go here to see photos and a video of her work.
Thank you, Angela!
Posted by Patty at 6:51 AM 3 comments: